This green Enchilada Casserole is a cinch to make and so much easier than rolling individual enchiladas. With layers of a meaty bean mixture, creamy enchilada sauce, corn tortillas, and cheese, it’s a great recipe to have on hand for a quick and easy weeknight dinner.

You’ll love that this recipe uses so many pantry staples and ingredients you probably already have on hand. The canned black beans, canned diced tomatoes, and canned green chili sauce make this dish extra convenient.

Why this recipe works!

Green Enchilada Casserole is also a great lightened up recipe. Traditional enchilada casserole is full of heavy ingredients like beef, sour cream, and lots of cheese.

Here, the flavors you love are all there, just lightened up! By swapping the ground turkey for beef, you save significant calories. Also, the beans add great texture and protein to the casserole.

Additionally, to make the enchilada sauce creamy without the extra fat, just add nonfat greek yogurt. This is also a great way to mellow the flavors for anyone who may find enchilada sauce too spicy.

How to Make Enchilada Casserole with Ground Turkey

The prep for this recipe is simple and much easier than rolling individual enchiladas. You can put together the sauce while the turkey browns and have this in the oven in 10 minutes! Follow these step-by-step instructions on how to make green enchilada casserole with ground turkey.

Start by preheating the oven to 350 degrees. Then, in a large sauce pan, cook the onions until slightly softened. Add in the ground turkey and break up the meat with your spoon. Continue cooking until the turkey is cooked through and no longer pink. Sprinkle in the taco seasoning.

When the meat is cooked through, add in one can of rinsed black beans and one can of drained diced tomatoes. Cook until warmed through.

To make the sauce, whisk together the canned green enchilada sauce, yogurt (could also use sour cream), and the lime juice in a bowl. If you wanted to make homemade sauce, check out this recipe for Green Enchilada Sauce.

Step 3: layer the casserole and bake

Spray a 9 x 13 baking dish with cooking spray and assemble the casserole. Firstly, spoon ½ cup of the sauce on the bottom.

Then layer on four corn tortillas (one cut in half) so that the sauce layer is covered.

Next layer on half the meat mixture.

Then, scoop on about ½ cup of the remaining sauce. Use a spoon to spread the sauce over the meat mixture.

Sprinkle on ½ cup of the shredded cheddar cheese.

For the final layer, place the tortillas on top, spread on the remaining enchilada sauce, and sprinkle on the cheese.

Bake for 35-40 minutes until bubbly. Alternatively, you could cover and refrigerate the casserole for up to 24 hours before baking. Green Enchilada Casserole can also be frozen for up to a month.

How to serve enchilada Casserole

Let the casserole cool for 10 minutes before cutting and serving. Top the entire casserole with diced cilantro or parsley and serve with sliced avocado, diced tomatoes, and sour cream.

This recipe is excellent as is or served with a fresh salad like this Tomato Onion Salad. Or serve on the side of Mexican Quinoa or with these Mexican-style Pan Roasted Vegetables and Beans.

If you love Mexican recipes, be sure to check out my post on Taco Bar Ideas – Mexican Buffet Menu.

I hope you love this recipe for Green Enchilada Casserole. Be sure to comment below if you try it. Enjoy! 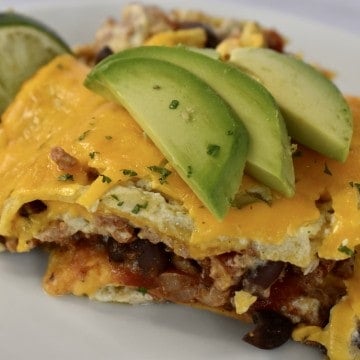 If making ahead, refrigerate for up to 24 hours before baking. Can also be frozen for up to a month.

Delicious and fun Halloween desserts that everyone will love!

Some of my most popular side dishes for your Thanksgiving Feast!