Cinnamon Sugar Blondies are an easy way to get your cinnamon roll fix with a lot less work! Delicious soft blondies topped with cinnamon sugar and a cinnamon glaze.

If you love cinnamon sugar, you are going to love these blondies. A mix between a snickerdoodle and a cinnamon roll, these blondies are a guaranteed crowd pleaser.

So, if you have a craving for cinnamon rolls, give these easy blondies a try. They are perfect with a cup of coffee, entertaining, or just snacking on. If you love new takes on classic flavors, be sure to try these Cannoli Cookies – full of those cannoli flavors you love.

Read on to see how easy it is to make cinnamon sugar blondies – they are sure to be your new favorite!

How to Make Cinnamon Sugar Blondies

These tasty buttery blondies come together fast and give you that delicious cinnamon roll flavor you crave. And, making them couldn’t be easier.

Firstly, start by preparing your 9 x 13 inch baking pan. I like to be able to lift my squares out of the pan, so I always line my pan with parchment paper. However, a good spray with nonstick cooking spray works too.

Then, mix together the flour, baking powder, and salt in a medium bowl and set aside.

In a large bowl, use an electric mixer to mix together the butter and brown sugar (two key ingredients for blondies). Then, add in the eggs and vanilla. Mix until well combined.

Pour in the flour mixture and mix until just combined. Use a rubber spatula to get all of the flour off the sides and bottom of the bowl.

Spread the batter into the prepared baking pan. You can smooth with a rubber spatula or clean damp hands. The mixture will be sticky so damp hands are always a good way to go.

Don’t be concerned by the amount of cinnamon in the topping. It really makes the bars special. And, all you have to do is sprinkle the mixture over top of the blondies before baking.

Bake in a preheated oven for about 20-25 minutes.

How to know when blondies are done baking

You will know that your blondies are ready when they start to pull away from the outside of the pan. Because the dough is meant to be chewy, you can’t rely on a toothpick to determine whether your blondies are cooked through.

Also, be sure not to over bake the blondies. You want them chewy and soft in the middle. So as soon as you see them pulling away from the sides of the pan, take them out of the oven.

For this recipe, blondies will cook in about 25 minutes at 350 degrees. If your oven tends to run warmer, start to check the blondies around the 20 minute mark.

Once the blondies are done baking, cool completely before applying glaze.

How to make the Glaze

This simple glaze is so easy to put together and gives the blondies that unique cinnamon roll look and feel.

Firstly, be sure that your blondies are completely cooled before applying the glaze. Rather than drizzling on the glaze in the pan, I like to remove the bars and glaze them a cutting board.

For the glaze, simply whisk together powdered sugar, milk, and cinnamon. You can add more or less milk depending on how thick you want the glaze.

Use a spoon or a whisk to drizzle the glaze over the cooled blondies in a back and forth motion. Let the glaze harden, about 5 minutes, then cut the bars into squares and serve.

These blondies couldn’t be easier to make. Here are some tips on getting the best blondies ever.

Blondies are a great way to get that sweet treat you crave, without all of the work of making individual cookies. Be sure to check out these other blondies recipes:

Peanut Butter Banana Blondies are a sweet, salty, and crunchy treat that’s a great way to use up ripe bananas.

Frosted Butterscotch Blondies are loaded with walnuts and topped with a tasty butterscotch frosting.

Candy Corn Blondies with chocolate and white chocolate chips are the perfect treat to feed your candy corn obsession!

I hope you love these Cinnamon Sugar Blondies. Be sure to comment below if you try. Enjoy! 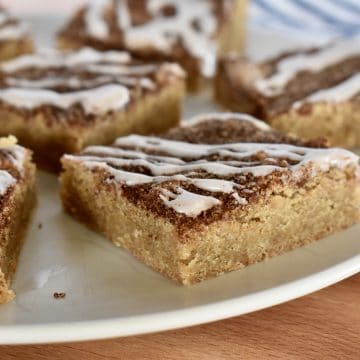 You can make these ahead and refrigerate for up to a week. Or, place in an airtight container and freeze for up to two months.  Be sure to line the baking pan with parchment so you can easily lift out and cut the bars into squares.

Side dishes are always necessary! Here are some fan favorites.

In my opinion, cocktails need to be simple to make and totally delicious!