Slow Cooker Ham is a great way to cook your holiday ham. Using a boneless ham and a delicious brown sugar glaze, this ham requires little prep and cooks easily in your slow cooker.

Hosting a big get together and need to save space in the oven? This great idea for Slow Cooker Ham yields excellent results and takes up no oven space because you cook it on the counter in the CrockPot!

Need to cook a turkey breast? Give the slow cooker a try with this delicious and easy recipe for Slow Cooker Turkey Breast. And, for another delicious holiday favorite, don’t miss this Cranberry Pineapple Sauce or my fan-favorite Cornbread Stuffing. Change up your mashed potatoes with this tasty recipe for Cacio e Pepe Mashed Potatoes!

Why this Slow Cooker Ham is the Best!

Recently I discovered that Costco sold a boneless ham year-round, and since then I’ve been sold. My family loves ham and we love having leftovers to add to sandwiches, Mac n cheese, breakfast burritos, or just by itself.

My ode to boneless ham continues… I love the fact that you can slice it however you want and don’t have to deal with a bone to cut around. Moreover, you can make ham cubes, perfect for scrambled eggs.

Boneless hams come in all different sizes. If possible, try to find one that is on the small size and not so long, so that it can fit in your slow cooker. However, you can always cut the ham into two or three large pieces so it fits.

The glaze make this ham extra special. It’s just a few ingredients that really do give the ham so much flavor. The brown sugar brings out the sweetness, while the mustard and vinegar add a nice bite.

To make a slow cooker ham all you need is a boneless half ham and the glaze ingredients:

The ham size you get depends on what the store has to offer. I find that the glaze is the perfect amount no matter what size ham I get.

How to Make Slow Cooker Ham

To start, set your slow cooker to low and spray the inside with nonstick cooking spray. You could also use a crockpot bag insert to make clean up a breeze.

Step 1: remove the ham from its packaging. You can drain any juices off or add them to the slow cooker.

Step 2: in a small bowl, whisk together the glaze ingredients including the brown sugar, dijon mustard, and apple cider vinegar. Pour the glaze over the ham in the crock pot. Turn the temperature to low and cover with a lid.

Step 3: Start to check the ham for doneness around 3 hours. You want to use a thermometer to make sure the ham is 140 degrees. Next, remove the ham from the slow cooker and let rest on a cutting board for 5 minutes. Slice the ham into desired size.

Step 4: Serve the sliced ham with the juices from the slow cooker. You can put the ham slices back in the slow cooker or serve on a platter with juices poured overtop.

What is the best ham to use in a slow cooker?

A traditional bone in ham will more than likely be too large for a standard slow cooker. I recommend using a boneless half ham. If the ham still doesn’t fit, you can always cut it in half to make it fit in the slow cooker.

What is an easy glaze for ham?

For a delicious and easy ham glaze, whisk together brown sugar, dijon mustard, and little bit of apple cider vinegar. Brush it on the ham while it cooks in the slow cooker.

How long do I cook a ham in the slow cooker?

If you are using a boneless half ham, it should cook at low setting in about 3-5 hours. No matter what size ham you are using, the internal temperature should read 140 degrees on a meat thermometer.

Should I buy pre-sliced ham?

Pre-sliced ham is served on the bone and will take up extra space in the oven. If you don’t cover the ham, you risk the slices drying out before the ham is done cooking. I recommend using a boneless half ham that isn’t pre-sliced, and cooking it low and slow in the slow cooker.

Be sure to serve with my Roasted Asparagus Ricotta Tart and Brussel Sprout Salad for a complete meal. For another delicious side, don’t miss this Italian Roasted Potatoes recipe!

If you have leftover ham, be sure to check out these delicious recipes featuring leftover ham:

Love this recipe? Please leave a 5-star rating in the recipe card below and/or review in the comments section further down the page. 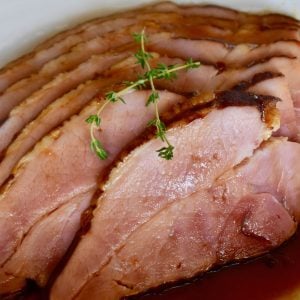 Got leftover ham? Go to https://thisdelicioushouse.com and search “leftover ham” for some great recipes!

Holiday brunch ideas that are all simple and delicious! Perfect for Christmas morning.

Delicious and easy Christmas Dinner ideas that everyone loves!