Learn how to throw a slime party! Follow these easy steps and instructions and have a fun and mess-free slime birthday party for your kids. Don’t miss these awesome slime party ideas.

If you’re a kid, slime is all the rage! And making it couldn’t be easier. So when my daughter asked for a combo rockstar/slime-making party, I was happy to put oblige. Check out my slime party ideas below and learn how to throw a slime party and do it all mess-free!

How to Throw a Slime Party

1. Make the slime ahead of time

Depending on how many kids you are having at the party and how old they are, you may want to make the slime ahead of time. I was so happy I decided make fluffy slime ahead. Because, with twelve six-year-old girls, this would have been really difficult to pull of at the party.

Make giant batches of slime using the biggest bowl you have and your favorite slime recipe (mine is posted below). You will have to make the recipe more than once, thankfully it’s so easy! How to throw a slime party fluffy slime recipe: 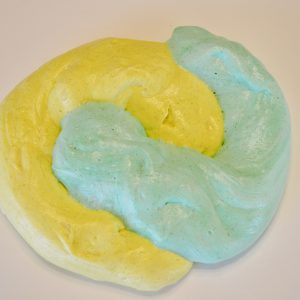 Always watch little kids when playing with slime!
Tried this Recipe? Pin it for Later!Mention @thisdelicioushouse or tag #ThisDeliciousHouse!

2. Store the slime in fun-to-decorate containers

Rather than having to divide the slime up at the party, it’s a good idea to give each kid his/her own container. And you may as well let them decorate that too and make it their party favor!

Divide the slime into the jars for the kids. Moreover, try to find easy to open and close glass containers if you can. Mason jars work great! Check out my picks below:

However, if you prefer to go plastic, Michaels has these Plastic Mason Jars by ArtMinds available as well.

3. Set up a decorating table for your slime party

Arrange a table for your little guests to sit at with their slime. If you have a plastic fold out table, that works well. Otherwise just throw a plastic tablecloth over the set up you have.

Not enough chairs? I like the idea of letting kids sit on the grass while working on a folded table on the ground in front of them.

So here’s the fun part! Give the kids their slime jars along with decorating options and let them decorate their containers. It’s a good idea to go this route first so that the jars have time to dry if you are providing paints.

Moreover, depending on the age of the kids, you may want to just provide stickers and washable markers. Older kids can handle puffy paints and sharpies.

5. Customize the slime for your slime party

So here’s the really fun part, letting kids customize and play with their slime. Have the kids pull the slime out of their jars and place in on the table in front of them. Then give them color options using gel food coloring. Pour a couple drops in the middle of the slime and let them fold it in to achieve their desired color.

Lastly, offer glitter, beads, and other things to include in the slime that goes along with the party theme. Warning, if you’re providing glitter, you may want to pour it in for the kids as little ones can get heavy-handed with the glitter!

It’s also a good idea to have extra contact solution on hand in case the slime feel sticky. Just knead in a couple of drops to reduce any stickiness there may be.

Hope you enjoyed this tutorial and step-by-step guide on how to throw a slime party. These great ideas are sure to make your slime party awesome!

Because you loved this post, here are some other posts I think you’d love too!

So, be sure to sign up and never miss a fun party idea or recipe!

Delicious and fun Halloween desserts that everyone will love!

Some of my most popular side dishes for your Thanksgiving Feast!