This recipe for Cinnamon Coffee Cake is a Starbucks copycat recipe so you can eat this delicious dessert at home! Made from the same recipe that Starbucks uses, you are going to love this classic treat.

Starbucks Cinnamon Coffee Cake is one of my favorite treats to get when I’m picking up my daily coffee. I was thrilled to find out that I could make it at home using the recipe provided at Starbucks website.

I have tweaked this recipe using the ingredients I have on hand and simplified some of the instructions. You are going to love the end result of this moist and delicious coffee cake laced with cinnamon goodness!

If you love coffee cake, be sure to try my Pumpkin Streusel Coffee Cake or my Blueberry Ricotta Coffee Cake. For a classic coffee-flavored dessert, check out my Tiramisu Recipe! Biscoff lovers be sure to this simple Biscoff Toffee recipe!

This recipe for Starbucks Cinnamon Coffee Cake is the best, especially since it’s a recipe shared from Starbucks itself. Here, I give you additional guidance and simplify how to make the recipe using what you have.

Cinnamon Coffee Cake is a sweet and satisfying snack cake with layers of flavors and textures. There is a crunchy cinnamon topping as well as cinnamon layer within the cake.

This is a great recipe to have on hand for entertaining. It’s simple to make and can feed a crowd. Plus, it’s great to make ahead of time.

Cinnamon Coffee Cake is a great recipe to have on hand for brunches or the holidays. Give it a try, you won’t be disappointed!

This recipe has been modified from the original version from Starbucks. I have simplified the steps and make the baking instructions clearer, as well as provided substitutions for some of the ingredients.

To make this Cinnamon Coffee Cake, start by spraying a 9 x 13 inch baking pan with nonstick spray and lining with parchment paper. Preheat your oven to 325 degrees.

Step 1: In a large bowl, use an electric mixer to mix together the butter and sugar until light and fluffy; about 2 minutes. Add in the eggs and mix again. Then, add in the greek yogurt and vanilla and mix until well combined.

Step 2: To the same bowl, mix in the baking powder, baking soda, and salt. Stir in the flour and mix until all of the ingredients are well combined, scrapping down the sides of the bowl as you mix.

Step 3: To make the cinnamon streusel, in a separate bowl, mix together the flour, brown sugar, cinnamon, and salt. Add in cubed butter and work into the mixture using either a fork or your hands.

Bake in a preheated oven for 35-40 minutes, or until a toothpick inserted into the coffee cake comes out clean. You will know the cake is done when the edges start to pull away from the sides of the pan. Be careful not to over bake.

Let cool on a wire rack for 5-10 minutes before cutting a square. Enjoy with a cup of coffee or tea!

What is coffee cake?

How do you know when coffee cake is done?

If you don’t have a 9 x 13 inch baking pan, a standard sized 10 cup bundt cake pan would be a great alternative. The baking times will differ, so be sure to test for doneness using a toothpick.

Love this recipe? Please leave a 5-star rating in the recipe card below and/or review in the comments section further down the page. 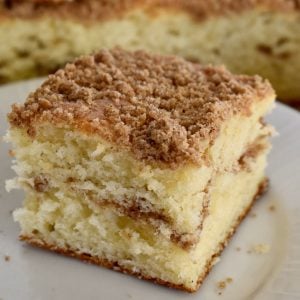 Side dishes are always necessary! Here are some fan favorites.

In my opinion, cocktails need to be simple to make and totally delicious!